Despite my promise to myself that I would document my pregnancy this time around and my pregnancy running routine, I haven’t posted anything here since a very belated post on Wharf to Wharf. Most of this is due to work and life things. In my real life, I work in college counseling at a high school, and the first semester is definitely a crazy time of year with teaching juniors about college and career pathways, and supporting seniors with their applications.

While I didn’t blog about my running, I did continue to at least post about running things on the ‘ole Instagram. After W2W, I skipped an August race. In general, I wasn’t particularly game to run in any events in the third trimester because of how uncomfortable I felt. This baby kicked a hell of a lot, and her head was really low and putting a ton of pressure on my pelvis, and my Braxton-Hicks contractions didn’t feel mild at all – much like in my first pregnancy. Around that time, my mileage was about 25-30 ish miles a week.

In September, however, I jumped into the Alameda Running Festival because I like supporting local running events, and because I had teammates running in the various distances. The festival features 5k, 10k, and a half marathon distances, and starts at the old Naval Air Station area at the Point. There were a few teammates that were coming from SF-Pen and Santa Cruz to test their legs in the 10k, and our East Bay chapter had a few people running the half marathon. I decided on the 5k because I could barely stand to run more than 30 minutes without feeling like there would be a pee-related emergency. 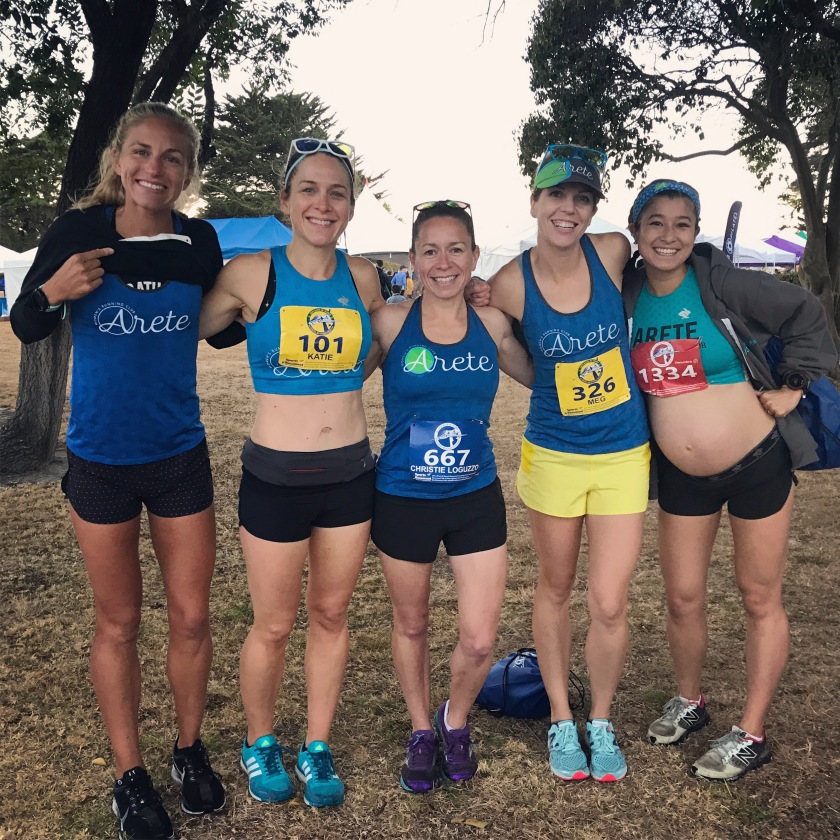 Long story short, my teammates did very well. Katie bagged a half marathon PR, while the other women had solid runs as tune-ups and confidence boosters. As for the 5k, the course wasn’t marked very well, so I and a number of other runners missed the turn, and wound up running long. In fact, we basically ran the 10k race course, minus 0.2 of the start because we started at a different spot than the 10k race. I was pissed about it, because I really tried for a solid 5k tempo, and because omg did I have to pee! After pushing through the 5k mark by my watch in under 21 minutes, I just basically coasted through to the finish with a handful of other runners that were similarly peeved. I went straight to the porta-potty, and agonized over the too-long pressure that lingered on my bladder. I chugged cranberry juice like my urinary tract depended on it for the rest of the day and two days following, worried I had given myself a UTI (I didn’t). I submitted feedback to the organizer and wound up with a comped entry for next year, yay! 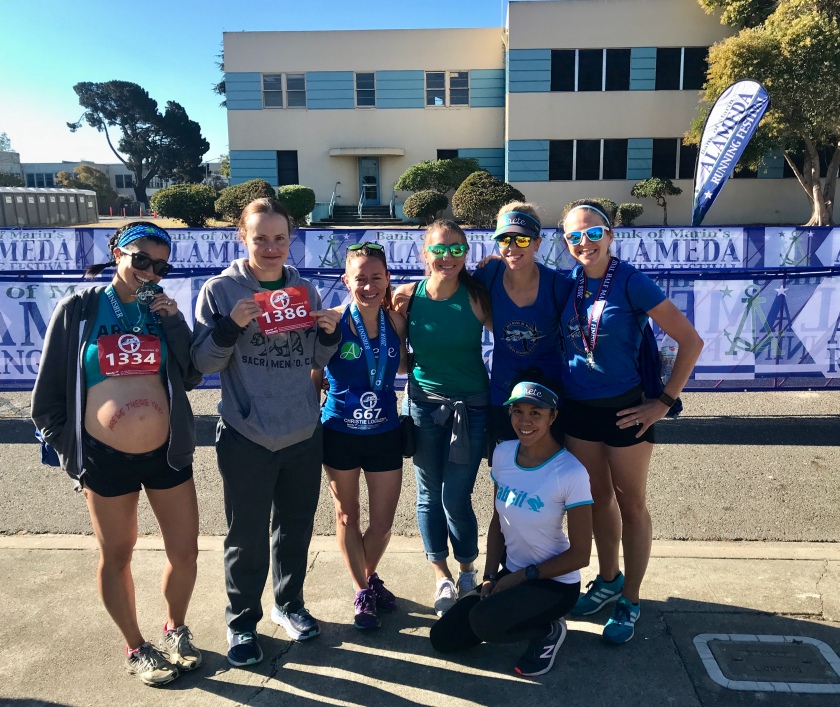 In October, I ran a 1 mile time trial 37 weeks into the pregnancy, or 2 weeks before I gave birth. I’m not a great miler, but I do often tell myself during races that I can push for anything for a measly mile. By then I was mostly treadmill running a couple of miles a week because there was less impact on the joints, but it was really nice to step out for a fast mile and a cool down mile. Though I hadn’t been running more than a couple of miles a day, I still felt strong and confident that I had some fast fitness in the legs.

Why does this all matter to me and feel like it’s worth documenting? Well, it’s reassuring to me that despite running less and increasingly slower – I wound up running 10-15 miles per week for the last couple of weeks of pregnancy – I kept my road mile trial times pretty consistent with each other. In fact, there’s really negligible change in pace despite getting bigger and more uncomfortable as the pregnancy wore on. I’m a big fan of runstreaking, which generally keeps my daily mileages on the lower end, so there were many days when I ran a mile and felt good and called it. The day I went into active labor, I showed up at the track to run final couple of pregnancy miles with some teammates. It seemed very fitting that I started my pregnancy racing the Kaiser Half with teammates, and ended it running with teammates.

Now that I am 6 weeks postpartum, I take this all to mean that I have the very fun job ahead in 2019 to enjoy digging in to find what my paces are for everything from the mile to marathon. Stoked!